Alex Albino, of the Femtoduino Store, is one of the original sellers on Tindie, with his store officially listed as opening on November 26, 2012. During this time, he’s sold well over 300 of his custom boards, and I was glad to catch up to him to ask a few questions.

Albino, who works as a software and web developer, first got into electronics after his NES was fried in a thunderstorm in junior high, and he got to take it apart. Eventually his interests led him to the Arduino and Fabio Varesano’s work, and multiple hardware platforms over the years.

Albino’s store started with him asking Fabio Varesano if he could sell Femtoduino boards, which have the same outputs as an Arduino Uno in the size of one’s thumb. Since Varesano wasn’t interested in selling them himself, he generously gave Albino permission to run with this design. Albino then went to work assembling and selling these boards, and even made sure to give a portion of the money he made—though he didn’t have to—back to Varesano to promote his open source work. 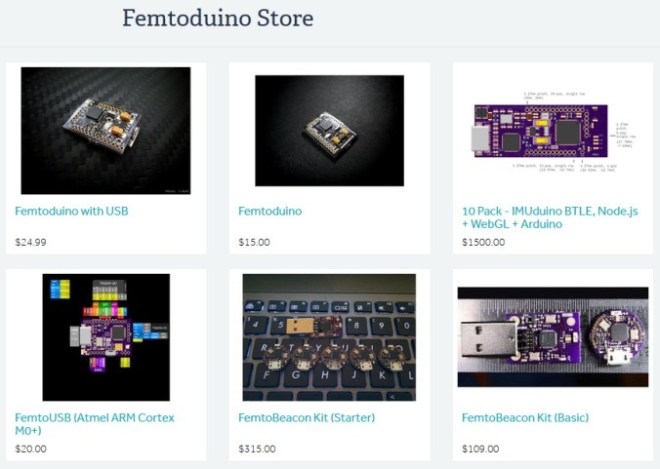 Of course, these tiny Arduino clones are still for sale, but Albino sells several other items, including the FemtoBeacon wireless IMU (inertial measurement unit) sensor. He even notes his store theme as providing the smallest open source IMU sensors in the world. You can see one in the image above next to a U.S. dime—quite small indeed. He hopes to grow the Femtobeacon business into a full-time job in the future.

Naturally, Albino has bought from other Tindarians in the past, which he says is always fun. He also notes that, “If you sell anything on Tindie, make sure to package carefully, take decent photos, and include videos of stuff in action!” As such, here’s a video of the tiny Femtoduino in action: