Liz from Blitz City DIY wrote about the process of designing a PCB ornament:

As the holidays approached this year, I felt a need to create a DIY gift for my family and friends. I struggled at first to find a medium. Should I 3D print something? Should I knit? But then it hit me: everyone loves blinky LEDs and I want to keep getting better at PCB design. I’ll do a PCB ornament! 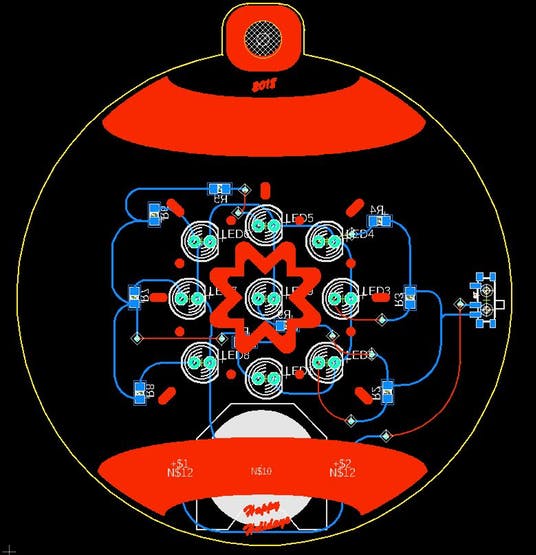 If you don’t have a traditional electronics background PCB design can seem scary, overwhelming and something that’s meant for more experienced people that have “real skills”. If you start simple and slowly add-in new methods and design features to your boards you’ll soon realize it isn’t so scary and that much like everything else in life it just takes practice and patience to learn. And once you have your first project on a custom PCB instead of a piece of perf board you’ll be hooked.

Now Tim’s onto the next big thing. He’s adaped the Tomu form factor to an FPGA board called Fomu with an active crowd funding campaign right now. The board will ship with a RISC-V core already loaded that can be programmed using DFU (or possibly mass storage). This is a popular move right now since a lot of people want to play with RISC-V or FPGA and here’s a way to do both without actually having to haul around extra equipment with you.

Some might think: what can you do with an FPGA where it’s kind of hard to connect external circuits? You could practice adding peripherals to RISC-V and other cores, but maybe what you should be thinking is: what could I do with my laptop if I had some dedicated parallel processing available? The board carries a Lattice iCE40UP5K, 1 MB of flash, 128 kB of RAM, runs at 48 MHz, and is compatible with the open source IceStorm toolchain. 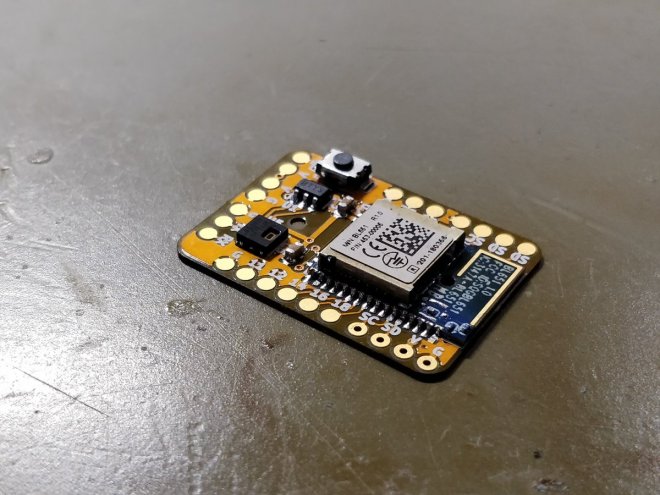 We recently shipped our first Flex PCB orders to customers, and we were very excited to see Benjamin (kilobyte_ch) using a flexible PCB in this project!

And it even fits in the remote 😀 1.6mm PCB + Module was to thick. Flex PCB + Module fits perfectly. pic.twitter.com/ejsRM0uAEA

A familiar spirit, or just a familiar, is a creature rumored to help people in the practice of magic. The moniker is perfect for Archimedes, the robot owl built by Alex Glow, which wields the  Google AIY kit to react when it detects faces. A series of very interesting design choices a what really gives the creature life. Not all of those choices were on purpose, which is the core of her talk at the 2018 Hackaday Superconference.

The next Hardware Happy Hour (3H) Chicago is Tuesday, January 15:

Bring all of your holiday gadgets and gizmos! Did you build a blinky Christmas tree ornament? Did you get a new scope from Santa? Did you take apart some toys? Bring it all to the meetup!

We’re trying out a new location for the new year! Come have a pint, show off your latest project and get to know your fellow Chicago tinkerers.

Bring all of your holiday gadgets and gizmos! Did you build a blinky Christmas tree ornament? Did you get a new scope from Santa? Did you take apart some toys? Bring it all to the meetup! We’re trying out a new location for the new year! Come have a pint, show off your latest project and get to know your fellow Chicago tinkerers. 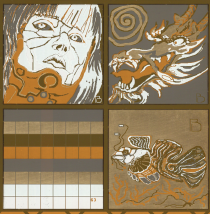 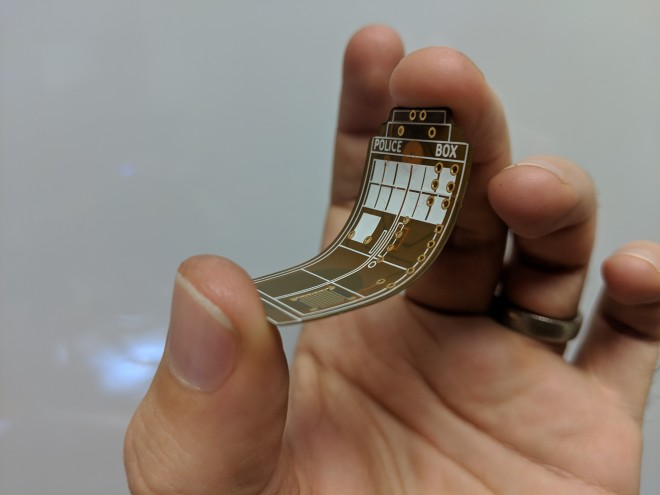 Our first flex panel has arrived!

Not only is this design by The Maker’s Box bigger on the inside – it now bends, too ✨

Find out more on our Flex PCB service page 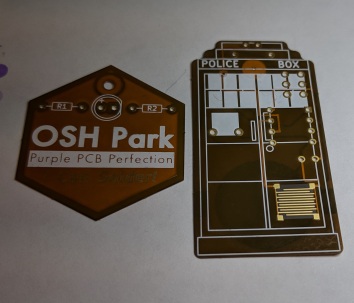 If there’s one thing that will bring down the yield of your PCB assembly, it’s your solder paste. Put too much on, and you’ll get bridged leads. If you don’t put enough on, that pad might not make good contact. [ScalarElectric] has an amazing trick that’s sure to astonish and astound. Just use wedges and you’ll get better yield with fine-pitched components.

The trick here is to define the cream/solder paste layer of each package as a wedge on each pad instead of the usual rectangle. This gives a few benefits, the largest being the increased gap between paste shapes. You’re also getting a reduction in the total amount of paste applied, and a subsequent improvement in yield. (Reportedly, we’d love to see some data on this.)

via Clever Wedges That Will Increase Your PCB Assembly Yield — Hackaday 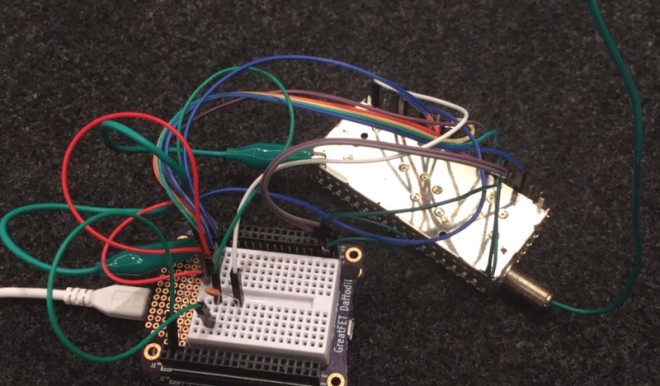 There were plenty of great talks at this year’s Supercon, but we really liked the title of Dominic Spill’s talk: Ridiculous Radios. Let’s face it, it is one thing to make a radio or a computer or a drone the way you are supposed to. It is another thing altogether to make one out of things you shouldn’t be using.

That’s [Dominic’s] approach. In a quick 30 minutes, he shows you two receivers and two transmitters. What makes them ridiculous? Consider one of the receivers. It is a software designed radio (SDR). How many bits should an SDR have? How about one bit? Ridiculous? Then you are getting the idea.

Dominic is pretty adept at taking a normal microcontroller and bending it to do strange RF things and the results are really entertaining. The breadboard SDR, for example, is a microcontroller with three components: an antenna, a diode, and a resistor. That’s it. If you missed the talk at Supercon, you can see the newly published video below, along with more highlights from Dominic’s talk.

via Radio Gets Ridiculous — Hackaday

Did you read all 3000+ articles published on Hackaday this year? We did. And to help catch you up, we preset the Hackaday 2018 Year in Review podcast!

Join us for the podcast, available on all major podcasting platforms, as Editors Mike Szczys and Elliot Williams attempt the impossible task of distilling the entire year into a one hour discussion. We’ve included every story mentioned in the podcast, and a few more, in the show notes here. But since we can’t possibly mention every awesome hack, we encourage you to share your favorites, and pat the writers on the back, by leaving a comment below.

iCEBreaker, The Open Source Development Board for FPGAs

The Hackaday Superconference is over, which is a shame, but one of the great things about our conference is the people who manage to trek out to Pasadena every year to show us all the cool stuff they’re working on. One of those people was [Piotr Esden-Tempski], founder of 1 Bit Squared, and he brought some goodies that would soon be launched on a few crowdfunding platforms. The coolest of these was the iCEBreaker, an FPGA development kit that makes it easy to learn FPGAs with an Open Source toolchain.

The hardware for the iCEBreaker includes the iCE40UP5K fpga with 5280 logic cells,, 120 kbit of dual-port RAM, 1 Mbit of single-port RAM, and a PLL, two SPIs and two I2Cs. Because the most interesting FPGA applications include sending bits out over pins really, really fast, there’s also 16 Megabytes of SPI Flash that allows you to stream video to a LED matrix. There are enough logic cells here to synthesize a CPU, too, and already the iCEBreaker can handle the PicoRV32, and some of the RISC-V cores. Extensibility is through PMOD connectors, and yes, there’s also an HDMI output for your vintage computing projects.