We are proud to sponsor the beautiful B-Sides PDX 2019 badge that Maggie designed! 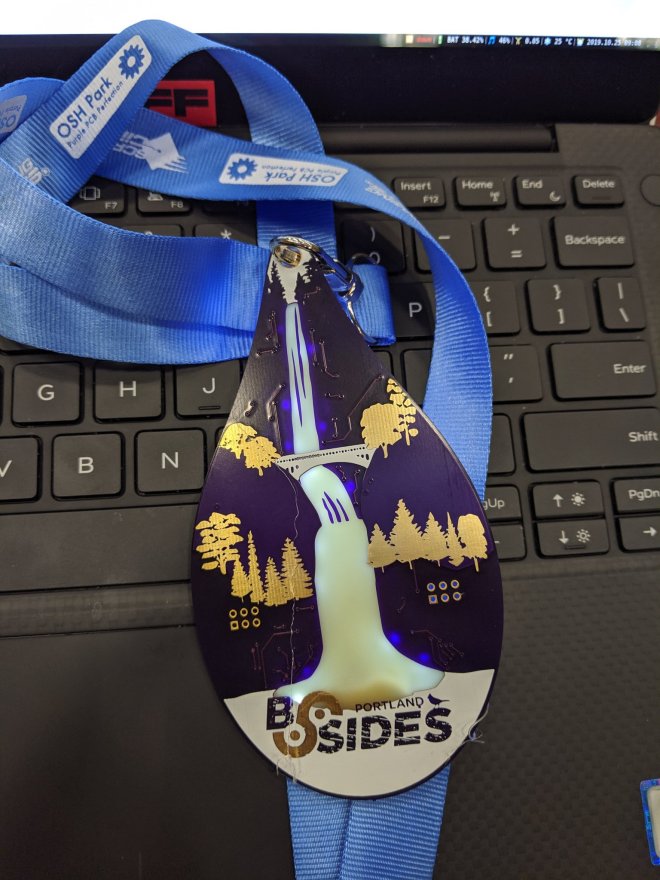 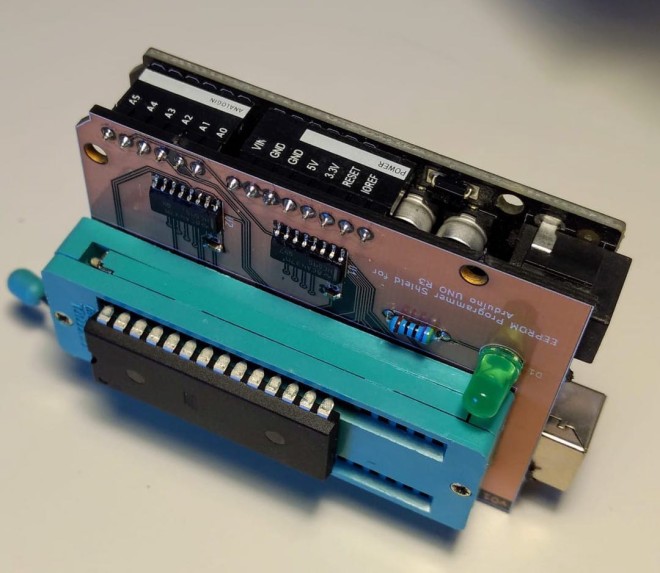 To load data you need an EEPROM programmer and like the chips, these devices have become somewhat rare and expensive. Hence the project to build one ourselves.

The easiest approach is probably to use a microcontroller to bridge between the chip and a computer, run a bidirectional serial protocol between the microcontoller and the computer to send image data back and forth.

Since the AT28C256 requires 5v for writing, we can’t use a Raspberry Pi or Arduino Nano/Mini as their GPIO ports are all 3.3v. The regular old Arduino UNO is 5v though and so should work nicely. 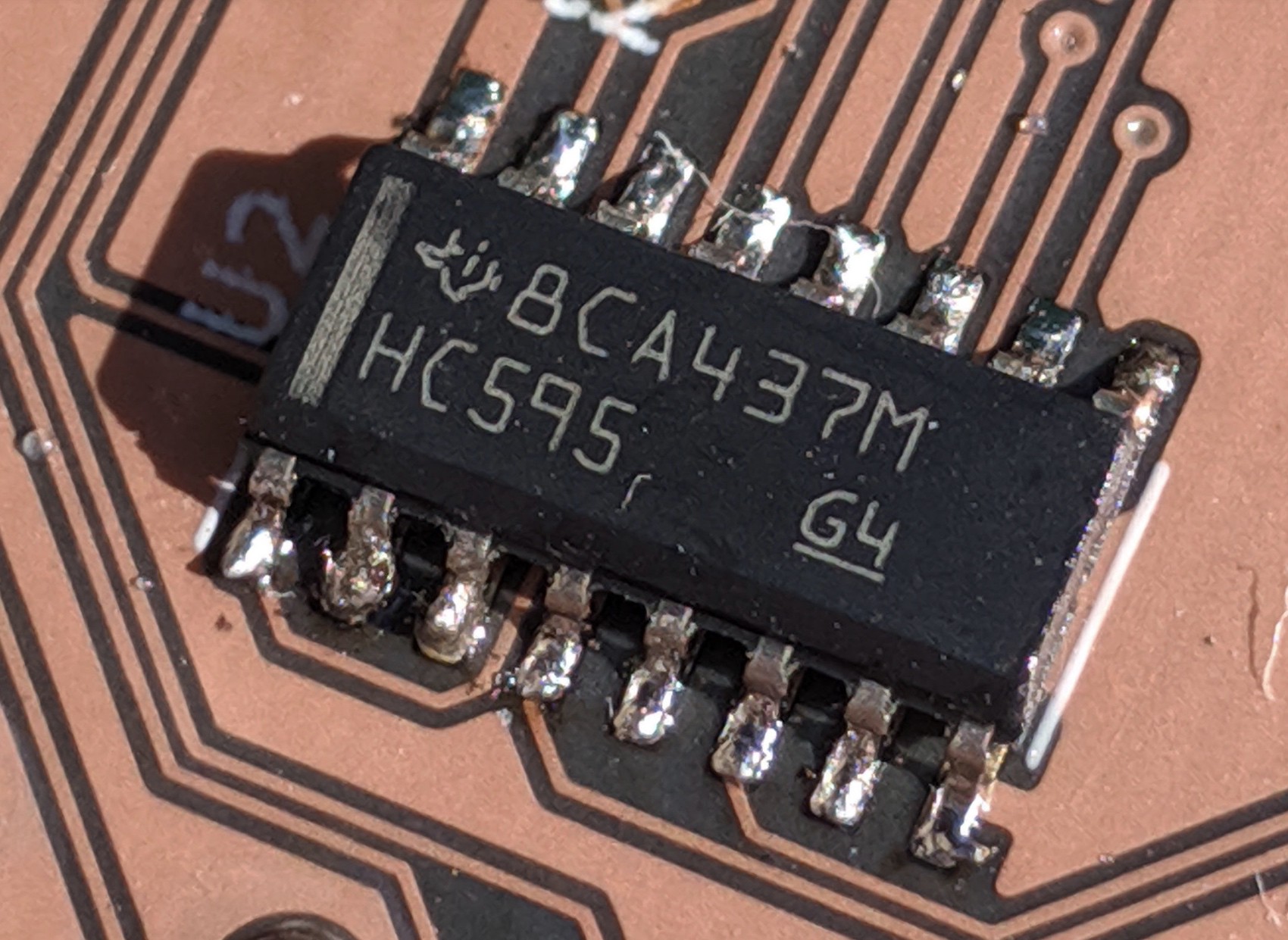 To gain some experience hand-soldering surface mount devices, I picked SMT packages for the shift registers and decoupling capacitors.

When I went to upload the Gerber files to OshPark for fabrication I noticed their “ After Dark “ option that uses a black FR4 substrate, with transparent soldermask that makes the copper traces pop against a black background.

The KiCad project as well as the serial protocol description and code for the Arduino and Python CLI can be found on on GitHub.

We are big fans Hackaday Supercon and several of the OSH Park team will be attending again this year from November 15 – 17.  Here’s some of what to look forward to:

Four weeks from today the Hackaday Superconference comes alive for the fifth year. From engineering in challenging environments to elevating the art form of electronics, here are nine more talks that will make this a year to remember.

In addition to the slate of speakers below there are three other announcements, plus workshops. Jeroen Domburg (aka Sprite_TM) is designing this year’s badge based around a beefy FPGA running a RISC-V core and using open source synthesis tools. We’ll have more on that soon, but if you just can’t wait, check out the expansion board spec he just published, and join the conference chat room for the inside track. Badge hacking is sure to be the liveliest we’ve ever seen.

Tickets are sold out but you can still get on the waiting list and hope that one becomes available. If you are holding onto one of these hot commodities but are unable to use it, please return your ticket so that we can get it to someone waiting with their fingers crossed.

Join Hackaday on Wednesday, October 23 at 12:00PM US Pacific time for the Open Hardware Month Hack Chat with Michael Weinberg! 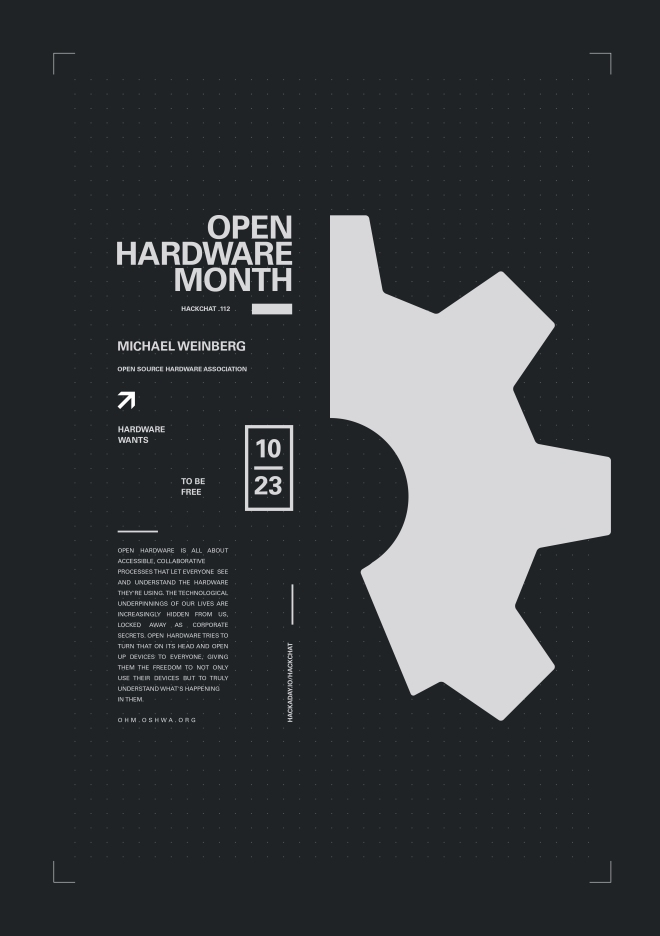 It seems like everything and everyone has a special day set aside on the calendar. You know the drill – aheadline declaring it National Grilled Cheese Day (sorry, you missed it – April 12) or National Bundt Pan Day (not even kidding, November 15). It seems only fair with all these silly recognition days floating around that we in the hacking community should have a day of our own, too, or even a whole month. That’s why the Open Source Hardware Association declared the entire month of October to be Open Hardware Month.

Open hardware is all about accessible, collaborative processes that let everyone see and understand the hardware they’re using. The technological underpinnings of our lives are increasingly hidden from us, locked away as corporate secrets. Open hardware tries to turn that on its head and open up devices to everyone, giving them the freedom to not only use their devices but to truly understand what’s happening in them, and perhaps repair, extend, and even modify them to do something new and useful. Celebrating that and getting the message out to the general public is certainly something worth doing.

Michael Weinberg is a board member at OSHWA, and he’ll be joining the Hack Chat on October 23 (National Boston Cream Pie Day) to discuss Open Hardware Month and open-source hardware in general. We’ll learn about some of the events planned for Open Hardware Month, how open hardware is perceived beyond the hacker community, and what’s on tap for the 10th anniversary Open Hardware Summit in 2020.

Our Hack Chats are live community events in the Hackaday.io Hack Chat group messaging. This week we’ll be sitting down on Wednesday, October 23 at 12:00 PM Pacific time. If time zones have got you down, we have a handy time zone converter.

Click that speech bubble to the right, and you’ll be taken directly to the Hack Chat group on Hackaday.io. You don’t have to wait until Wednesday; join whenever you want and you can see what the community is talking about. Bil Herd gave some great advise on high-speed PCB design last month during a Hackaday Hackchat.  You can read the transcript here:

Printed circuits have become so commoditized that we seldom think much about design details. EDA software makes it easy to forget about the subtleties and nuances that make themselves painfully obvious once your design comes back from the fab and doesn’t work quite the way you thought it would.

PCB design only gets more difficult the faster your circuit needs to go, and that’s where a depth of practical design experience can come in handy. Bil Herd, the legendary design engineer who worked on the Commodore C128 and Plus4/264 computers and many designs since then, knows a thing or two in this space, and he’s going to stop by the Hack Chat to talk about it. This is your chance to pick the brain of someone with a wealth of real-world experience in high-speed PCB design. Come along to find out what kind of design mistakes are waiting to make your day miserable, and which ones can be safely ignored. Spoiler alert: square corners probably don’t matter. 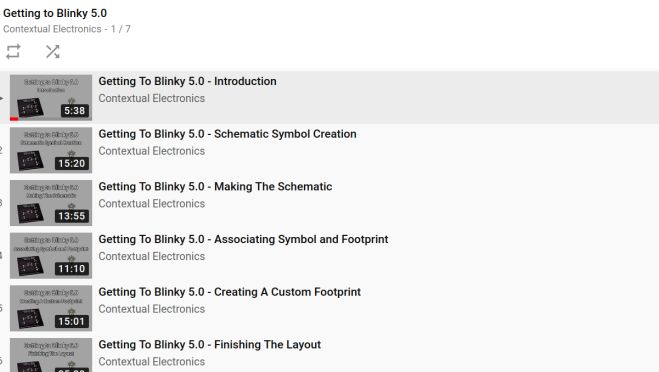 Want to learn to design circuit boards in KiCad?

Chris Gammell of Contextual Electronics has updated the wonderful Getting to Blinky tutorial series for KiCad 5:

Getting to Blinky with KiCad 5 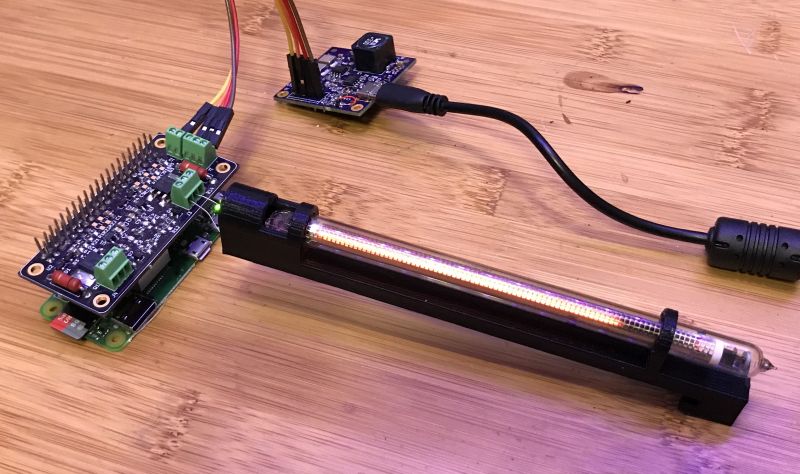 Rarely during product development do you get it correct on the first design iteration. Something always goes wrong or just isn’t perfect. However, like trying for a hole-in-one on a par 3, you always try for perfection but expect to need a few extra strokes. So, while I almost hit a hole in one in the first version of the Nixie Tube HAT (Part 1), a few improvements were required. In this blog, I describe the few improvements found from Part 1 and complete the design to reach stage 6 of the surfncircuits defined development flow. As with the other projects in the blog, the complete design files in Kicad, schematics, layout, BOM, are available at GitHub for use in your own projects. You can build it yourself and the PCB can also be ordered directly from Oshpark.

We love seeing the astonishing array of projects large and small entered into Hackaday contests which push the boundaries of what is possible. Our latest has been the Connected World contest which was announced back in June, and today we’re pleased to bring you its four top winners. 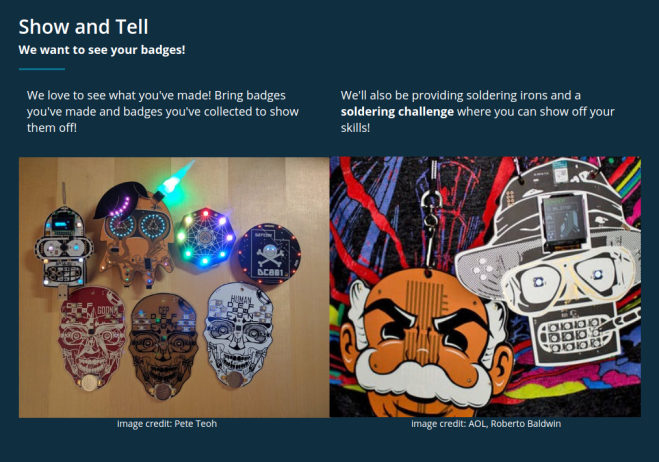 Hackster.io is hosting a BadgeLove meetup in San Francisco on Friday, October 18th:

Have you ever created a badge? Are you currently working on a badge? You are invited as a guest of honor to Hackster’s BadgeLove! Meetup. We want to take an evening to appreciate the hardware heroes who do the often thankless and frequently futile task of creating PCB artwork, shitty add-ons, and PCB badges.

We are excited to toast the winners of last winter’s BadgeLove! contest on Hackster. Come in person, record a video or join via YouTube Live, and show us what you’ve built. 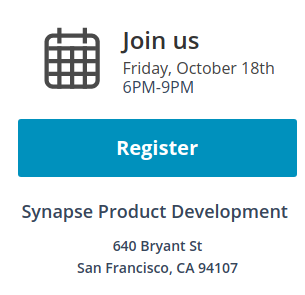 BadgeLove meetup in SF on October 18 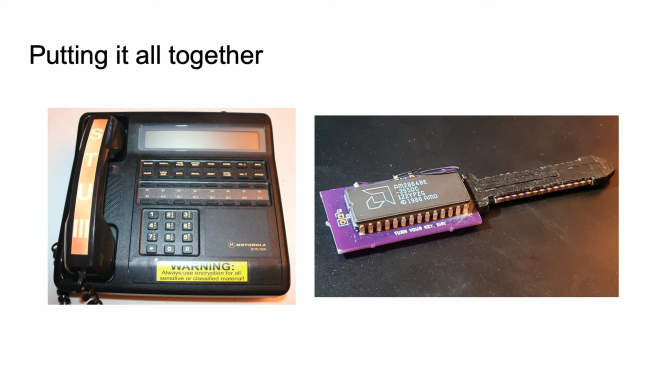 Check out this entertaining talk by John McMaster from HDDG at Supplyframe SF: “Replicating a Secure Phone Key”:

For this month’s meetup, we’re going to be joined by John McMaster (@johndmcmaster). John is the Bay Area expert on decapsulating chips and disintegrating circuits. For this Meetup, he’ll be speaking about The Secrets of the NSA Phone Revealed! Actually, it’s more about reproducing a secure phone key with x-rays, micrometers, KiCad and a 3D printer.