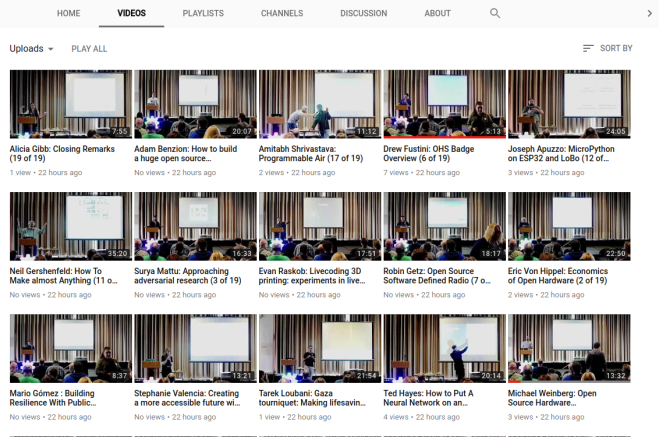 The Open Hardware Summit 2018 talks are now available as individual videos on YouTube:

Here is my brief overview of the badge on stage at the Summit:

Hackaday.io project for the OHS18 badge 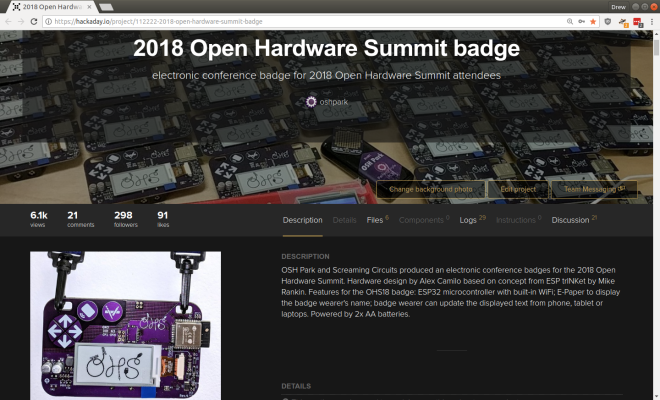 OSH Park and Screaming Circuits produced an electronic conference badges for the 2018 Open Hardware Summit. Hardware design by Alex Camilo based on concept from ESP trINKet by Mike Rankin. Features for the OHS18 badge: ESP32 microcontroller with built-in WiFi; E-Paper to display the badge wearer’s name; badge wearer can update the displayed text from phone, tablet or laptops. Powered by 2x AA batteries. 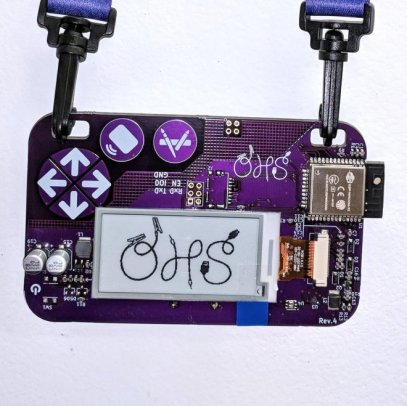 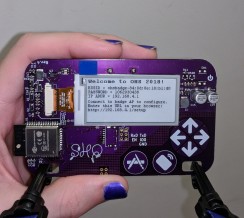 This project was developed by a team of wonderful people that came together on Hackaday.io, in particular, this badge could not have happened without Alex Camilo and Michael Welling! 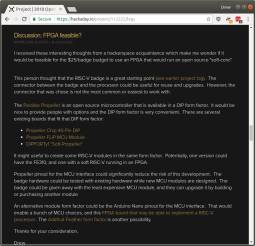 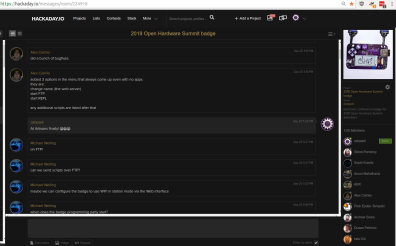 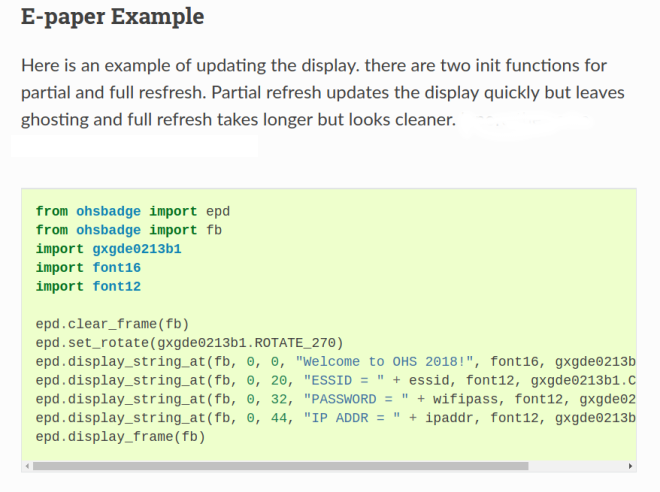 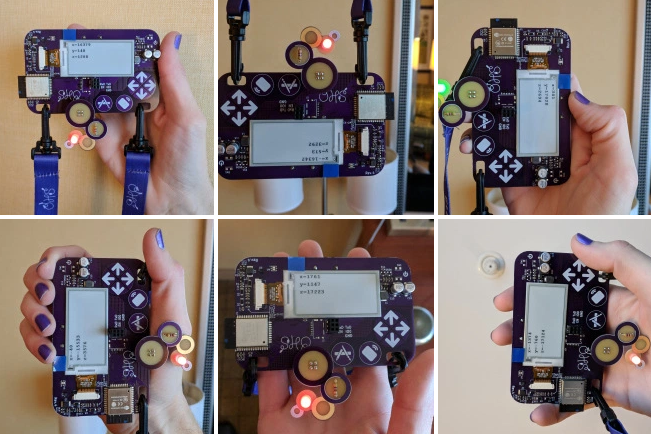 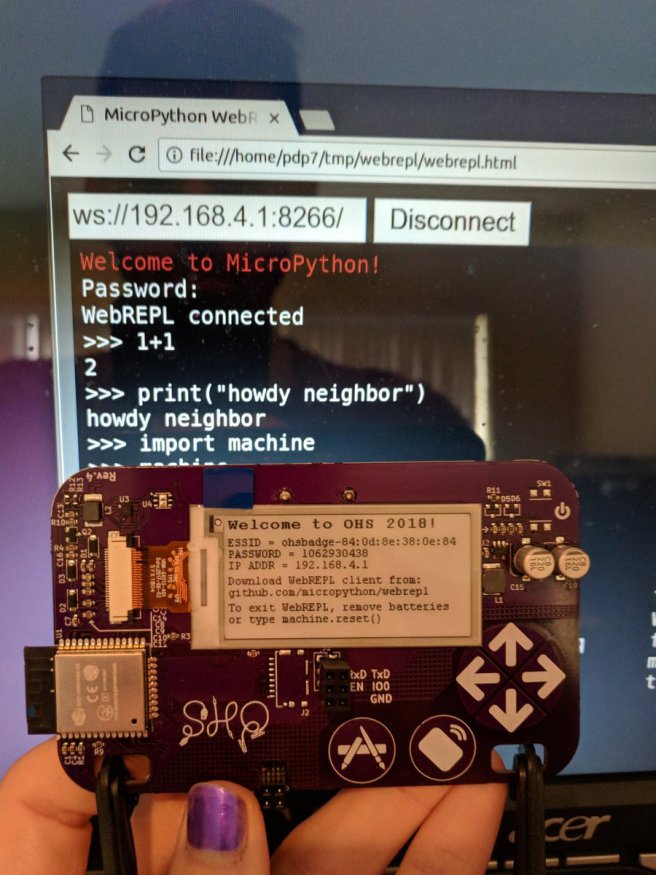 he 2018 Open Hardware Summit badge runs MicroPython firmware which allows for an interactive programming experience known as the REPL:

Getting a MicroPython REPL prompt

REPL stands for Read Evaluate Print Loop, and is the name given to the interactive MicroPython prompt that you can access on the ESP8266. Using the REPL is by far the easiest way to test out your code and run commands.

There is an USB-to-serial adapter board which be used to access the REPL on the badge via the serial port.  However, a simpler option is to use the WebREPL: 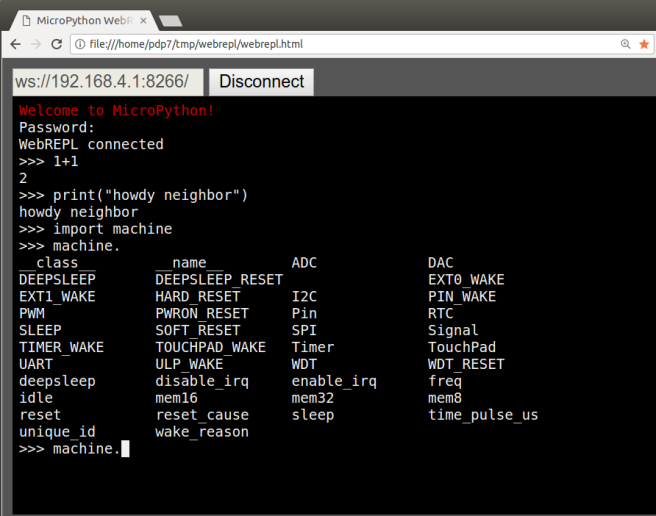 Learn to Solder add-on board 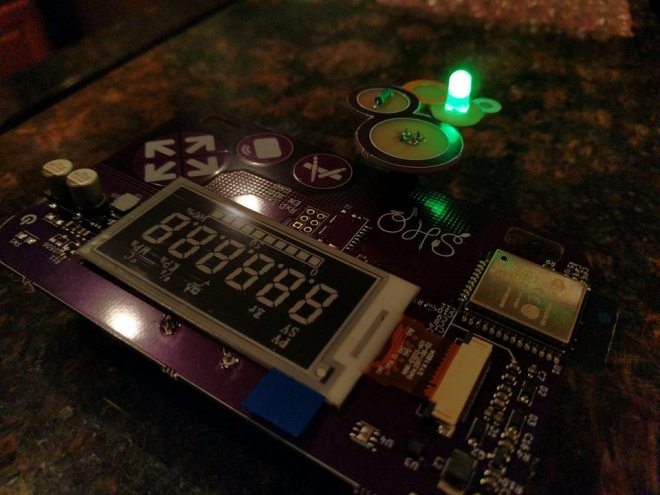 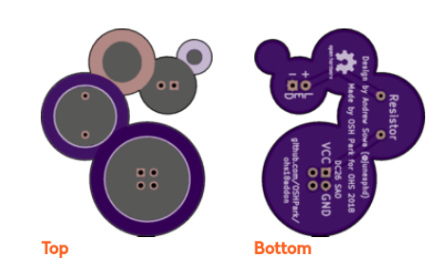 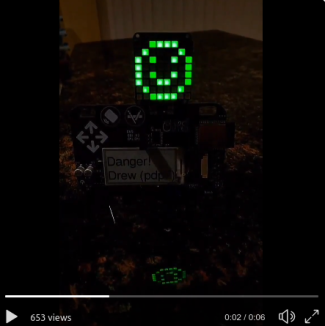 Alex Camilo created this wonderful programming jig!  Drew was able to use it to program all 300 badges and provision the names of the 150 people that pre-registered in time.  Thanks so much to Artisan’s Asylum makerspace near Boston for giving us a space to work on the badges before the Summit! 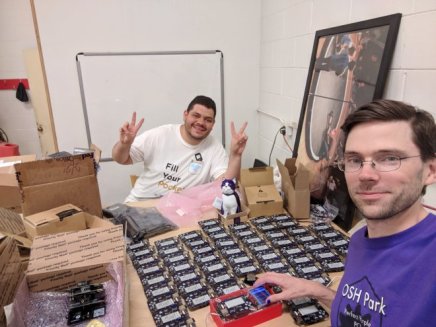 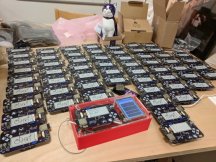 The boards were made through OSH Park, and Screaming Circuits took care of the assembly. Anyone who has ever built a badge will tell you it isn’t the assembly that gets you — it’s the programming and provisioning. This is especially true since the Open Hardware Summit badge is distributed with the attendee’s names already preloaded. That’s a few hundred badges, all with unique firmware. This is a nightmare by any definition.

However, there’s always a good solution to a problem, and [Drew] from OSH Park showed me the best programming jig I’ve ever seen during the Summit pre-game at Artisan’s Asylum. 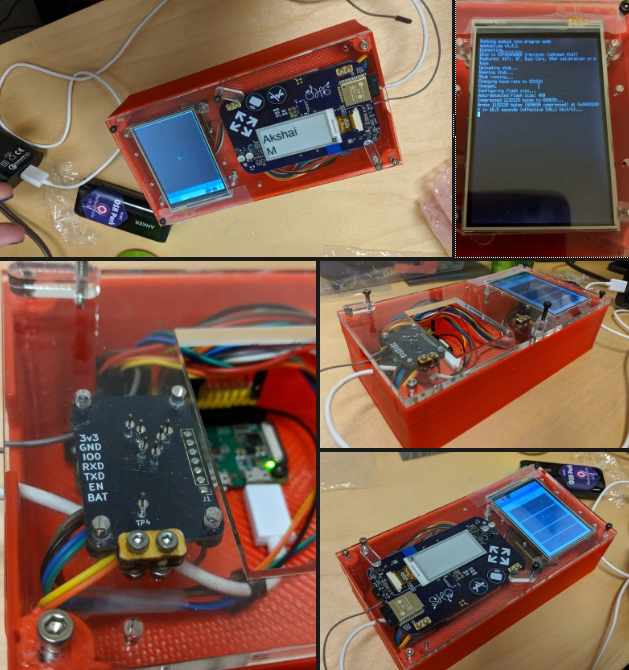 What you’re looking at is a 3D printed box loaded up with a touch-screen display, a Raspberry Pi Zero W, and a few pogo pins. This Raspberry Pi does all the heavy lifting by connecting to the Internet, pulling down the current version of the firmware, and loading that firmware onto the badge. There are a few more options thanks to the touch-screen interface, including provisioning all the badges with the names of the attendees — this can be done by reading a list of attendees and uploading the next one to the badge in the jig. All of this is wrapped up with a nice laser-cut cover that securely holds each badge exactly where it needs to be for the pogo pins to make contact.

This is, without question, the best programming jig I’ve seen. Any badge makers out there should take note: this is how you program a few hundred badges. The badge, itself, is great and just as this post is published there will be hundreds of eager hackers futzing about with this remarkable piece of hardware. If you want to check out the current progress of the badge hacking, check out the updates on Twitter

More fun with microscopes: here’s what an e ink transition looks like up close. Having way too much fun with @pdp7, @talldarknweirdo, @shahselbe and @jlewallen ⚡️ pic.twitter.com/cUgNZs0V8Y

Okay so watching solder paste heat melt under a microscope is so insanely satisfying. I can’t believe I’ve never seen this before! Blissfully geeking out with @pdp7 and @talldarknweirdo in the @conservify office after #supercon pic.twitter.com/Dm7tI55YLI 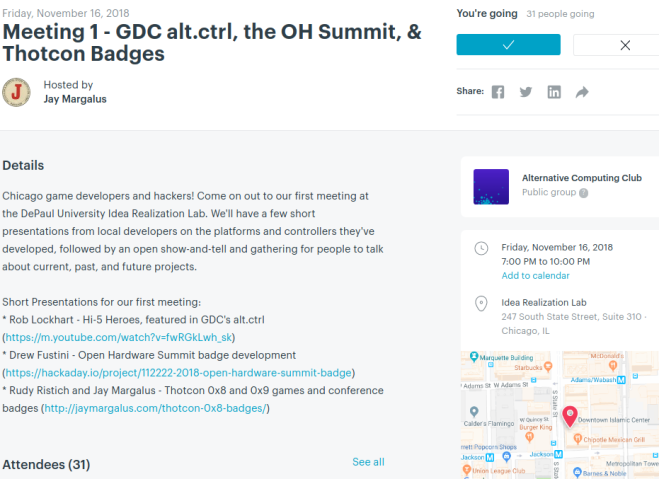 Chicago game developers and hackers! Come on out to our first meeting at the DePaul University Idea Realization Lab. We’ll have a few short presentations from local developers on the platforms and controllers they’ve developed, followed by an open show-and-tell and gathering for people to talk about current, past, and future projects.

Short Presentations for our first meeting: 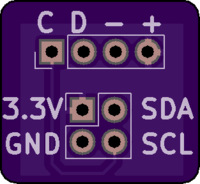 Bring your Open Hardware Summit badge to Hackaday Supercon in Pasadena this weekend!

Drew Fustini will have the badge programming jig with updated firmware featuring like the MicroPython WebREPL, accelerometer demo, and Magic 8-Ball app by Steve Pomeroy

Drew Fustini will also have USB-to-serial adapter boards for badge to share! 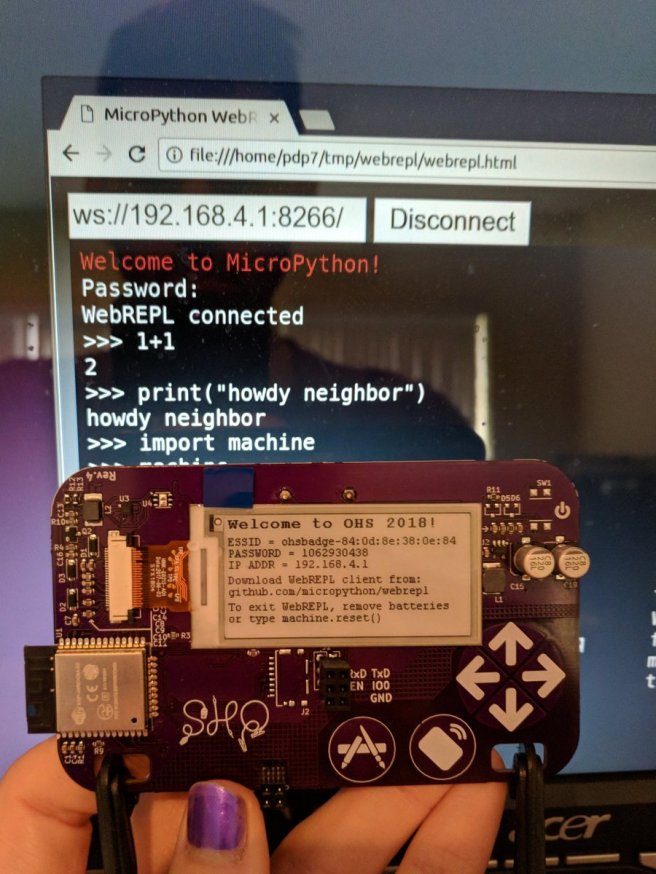 The 2018 Open Hardware Summit badge runs MicroPython firmware which allows for an interactive programming experience known as the REPL:

Getting a MicroPython REPL prompt

REPL stands for Read Evaluate Print Loop, and is the name given to the interactive MicroPython prompt that you can access on the ESP8266. Using the REPL is by far the easiest way to test out your code and run commands.

There is an USB-to-serial adapter board which be used to access the REPL on the badge via the serial port.  However, a simpler option is to use the WebREPL:

WebREPL – a prompt over WiFi

WebREPL allows you to use the Python prompt over WiFi, connecting through a browser. The latest versions of Firefox and Chrome are supported.

For your convenience, WebREPL client is hosted at http://micropython.org/webrepl . Alternatively, you can install it locally from the the GitHub repository https://github.com/micropython/webrepl

Before connecting to WebREPL, you should set a password and enable it via a normal serial connection. Initial versions of MicroPython for ESP8266 came with WebREPL automatically enabled on the boot and with the ability to set a password via WiFi on the first connection, but as WebREPL was becoming more widely known and popular, the initial setup has switched to a wired connection for improved security:

Follow the on-screen instructions and prompts. To make any changes active, you will need to reboot your device.

The MicroPython firmware for the badge has been updated to add WebREPL in the list of available apps.

You can order this USB to serial adapter board for the badge and then follow the instructions to build and flash the new firmware.  The WebREPL option will turn on WiFi and put the badge into AP mode.  Connect to it from your device, such as a laptop, and then connect to the badge using the WebREPL browser-based client. 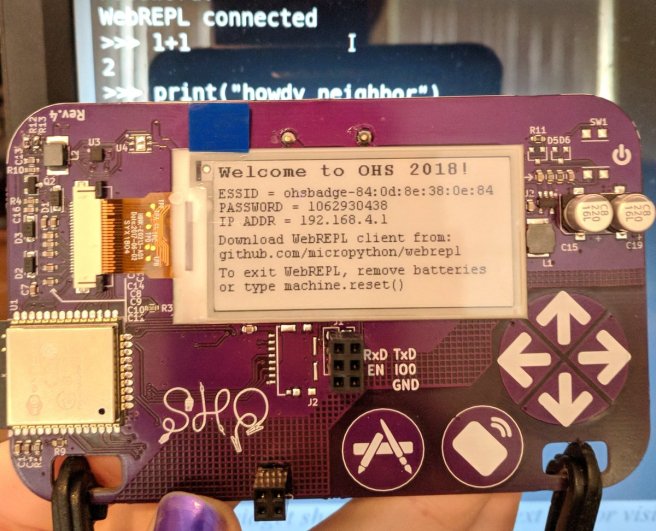 MicroPython demo app for the Accelerometer

This adapter board to connects a USB-to-serial cable to the 2018 Open Hardware Summit badge.

Extra badges being sold on Tindie

The extra badges from the Summit are being sold here on Tindie as a fundraiser for the Ada Lovelace Fellowship which provides travel assistance to the Open Hardware Summit. All sales revenue will be 100% donated to the Open Source Hardware Association (OSHWA) for this purpose.

This adapter board to connects a USB-to-serial cable to the 2018 Open Hardware Summit badge. 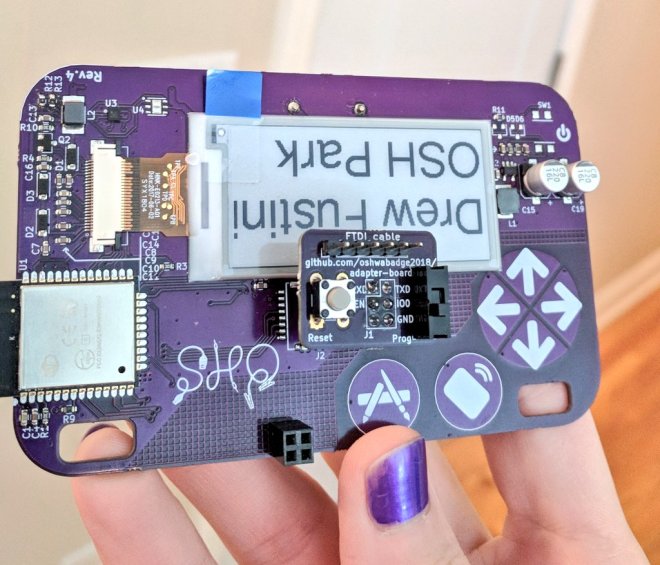 The badge features an ESP32 microcontroller running MicroPython firmware.  The firmware provides a Python interpreter prompt (REPL) on the serial port which allows interactive programming of the badge! 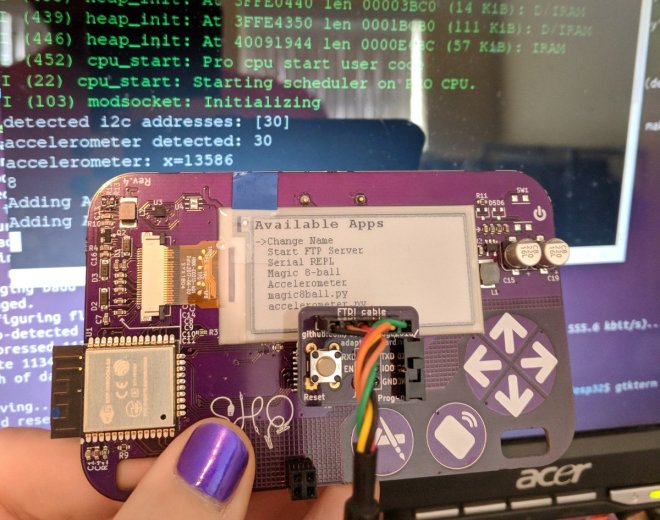 A previous blog post describes how to build and flash new MicroPython firmware to the badge:

The KiCad design files are shared on GitHub:

The board has been shared on OSH Park: 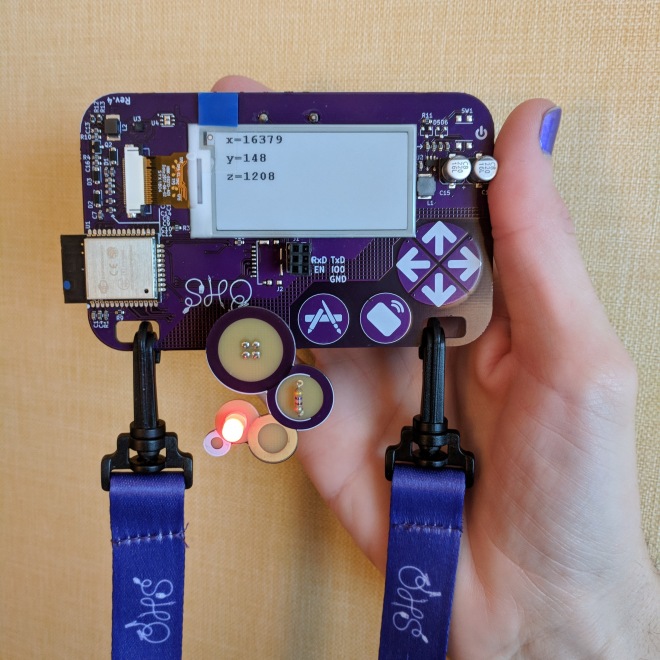 Make sure that R12 and R13 are populated. 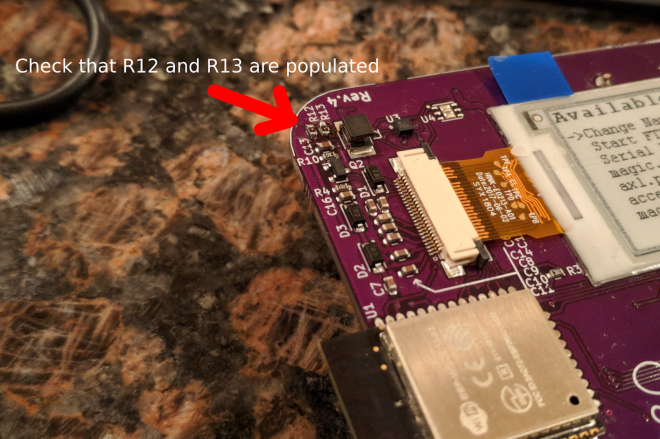 Awesome people at Artisan’s Asylum makerspace helped to solder these resistors on the badges right before Open Hardware Summit! 💜✨

It is possible that some badges were not reworked.  Please email [email protected] if they are missing from your badge.

This photo shows what is will look like when R12 and R13 are missing:

Download the Python file named accelerometer.py from the ohs18apps repository on GitHub:

Start the FTP server and connect to the SSID listed on the badge:

After the transfer completes, power cycle the badge by removing the batteries and reinserting.

Here are examples of the X, Y and Z axis of the accelerometer for reference: 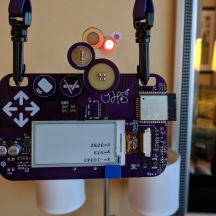 Open Source Hardware Association (OSHWA) recently held its Open Hardware Summit in Boston. For me this is one of the few times during the year that I get to hear about open source hardware projects directly from creators and users.
It’salso a fine time to play with some tech on location and network with people that have the DIY bug. Public Lab was in the mix with Jeff Warren talking up his reverse engineered toaster design for OSHWA’s new certification process and Bronwen Densmore wielding the new community microscope kit.